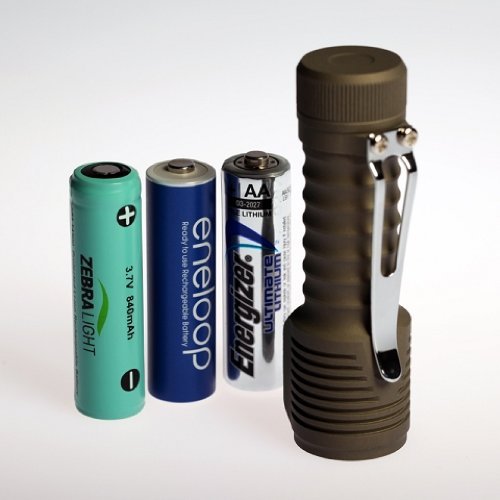 The Zebralight SC52 could fit the bill for those looking for a tough, bright and floody EDC led flashlight. It is not cheap but it includes a variety of features which may make you part with your cash. 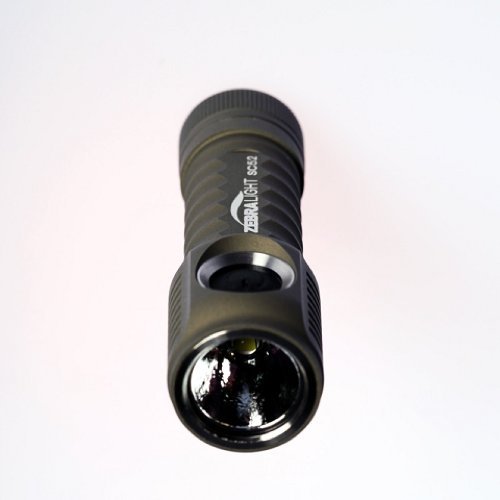 The Zebralight SC52 is powered by a single AA battery or its rechargeable equivalent. You cannot use a 14500 lithium battery with this light.

The light also has the following features:

The Zebralight SC52 came in a brown cardboard box which betrayed no details of the contents within. I welcomed this simplicity as the lack of gloss presumably cuts costs and makes it easier for the user to discard it without a second thought.

Although I was aware of the dimensions in advance, I was still amazed at how small the torch was. To give you an idea, it is pictured next to a conventional single AA flashlight, as well as an AAA keychain light. With this size, it could conceivably have been marketed as a very sophisticated keychain light itself.

The anodising is type III and seems excellent. You can only carry the SC52 bezel-down with the clip supplied. The clip is attached to the light with 2 screws and is removable.

The SC52 is also supplied with a headband so that you can use it as a headlamp. This is meant as a back-up, rather than a serious replacement for a real headlamp. Curiously, instead of wearing the light on your forehead, it is held at the side of your head and feels quite comfortable.

The light is operated by pressing the switch on the bezel. You have the option of switching on high or low first. One quick press switches on to high. Press for longer to access the low mode.

There are three main modes and each of them has a sub-level, (see output and runtime) or, in the case of high mode, a sub-level with three alternatives to choose from.

If you want to cycle through the main modes you keep the switch pressed down and hold it once you have reached the desired level then release to reach the corresponding sub-level.

This actually sounds complicated but, put simply, you need a maximum number of six clicks to reach the desired level. Although Zebralight SC52 does not mention it in the manual, you can actually reach the medium mode by double-clicking in off mode.

However, accessing and programming one of the three different sub-levels on high mode involves a series of six double-clicks and is much too long-winded, in my opinion.

There is no automatic mode memory and momentary activation is not possible.

The light can be used in candle mode on a soft or hard flat surface. Lock-out is possible by loosening the tail cap. This may be particularly important for those using the SC52 as an EDC led flashlight, since the switch does not need too much pressure to turn on.

Zebralight offers a replacement or return policy within 30 days of purchase and a one year warranty at Zebralight company.

The Zebralight SC52 output and runtime

These are as follows:

I tested the SC52 with a fully charged 2600mAh on high mode. On 285 lumens it managed 51 minutes, just three minutes short of Zebralight’s figures. The light becomes warm but you can still hold it as long as you do not grip too tightly.

The high level of 285 lumens is very bright for a 1x AA light, but this should not be confused with how far the torch can light. The SC52 produces a floody beam which illuminates very well for up to 35 metres.

You may well find it more useful to switch down to the lower high level of 175 lumens. For one thing, it lights almost as far, albeit not so brightly. For another, the runtime of 1.7 hours competes with lights running on 2 AA batteries.

For closer distances up to 10 metres the higher medium level produces a broad beam with a slight hotspot and is certainly sufficient for lighting in and around the house unless you have a big garden.

Without wishing to condone illegal activities, the lowest mode may be described as very good for burglars. With this level of light, you can easily detect valuable items indoors while remaining inconspicuous at the same time. In addition, the supplied headband means you can help yourself to the goodies with both hands.

For more law-abiding citizens, this level is good for reading in the dark but you may find the higher low level of 2.8 lumens better for tired eyes.

As mentioned before, the torch comes with a headband allowing the torch to be worn at the side of the head. I was pleasantly surprised to see that the beam was fairly well-centred in front of me. One disadvantage, however, is that you can only adjust the beam distance by moving the headband up or down.

I tried it for jogging and it didn’t work well because the light was rather unsteady in the holder. For more sedate pastimes, though, such as walking the dog or car repair work it may be worth consideration.

I used the SC52 with the Fenix AF02 bike mount and the Twofish Lockblocks bike mount. The two highest light levels are best for unlit paths. In view of the lighting distance, I tried the light on non-hazardous territory. The path was completely dark and fairly even. Both levels performed well here and there was no problem double-clicking to access each one.

Changing from high to medium presented a problem. This entails switching the light off for about 1.5 seconds so that it can automatically toggle through the modes. This may not sound long but when biking at fast speed in complete darkness it seems a lot longer, even on familiar terrain.

I also tested the medium mode on illuminated bike paths and found the lower mode more than adequate. The higher medium mode was better where the lighting was more infrequent.

One further point: the SC52 and the Lockblocks bike mount look like they were made for each other. They are both light and tiny and both fit comfortably into your trouser pocket.

How tough is it? What about winter?

I performed a waterproof test leaving the light switched on in a bowl of water for 30 minutes. The Zebralight SC52 was unaffected by this dunking.

I also left it in the freezer at -18°C for 7 hours to try to replicate wintry conditions. After taking it out, the lamp switched on and cycled through the modes without a hitch.

I also dropped it twice on a pile of stones from a height of 1.5 metres. The damage inflicted was barely visible – a slight scratch on the tail cap and another at the edge of the bezel. As before, the light performed faultlessly afterwards.

The Zebralight SC52 could fit the bill for those looking for a tough, bright and floody EDC torch. It is not cheap but it includes a variety of features which may make you part with your cash.

For one thing, the grey anodising not only looks pretty in comparison to the usual black finish, it also stays pretty, or at least it does after these rather superficial impact tests. Moreover, seven hours in the freezer at -18°C makes it more than winterproof for most people. The water test is a further indication of the light’s reliability in extreme conditions.

For those, like me, who hate multi-mode lights, Zebralight SC52 has at least attempted to simplify things with the one-handed operation. In addition, the runtime on the second highest mode of 151 lumens is exceptional. This may well be the most useful light level for those who want to light medium distances but would like a higher level for more detail.
The headband is also an unusual and welcome accessory, enabling you to convert the torch into a headlamp although it should be regarded as a back-up rather than a replacement for the real thing.

There were rather mixed results while biking. The Zebralight SC52   performed well on less challenging terrain, but it should not be used where you are uncertain of potential dangers. Then again, it does seem rather unfair to complain about a single AA light not performing too well off-road. For normal streets and familiar unlit paths it works very well and is ultra-portable when you reach your destination.

The awkward configuration of the different high modes, however, came as an unpleasant surprise, particularly as everything else is easily accessible.

Nevertheless, the Zebralight SC52 makes a very convincing case for itself. If you are looking for an all-weather light with a very good runtime on a single AA battery and are more interested in medium to close-up illumination, this flashlight may well be worthy of consideration.