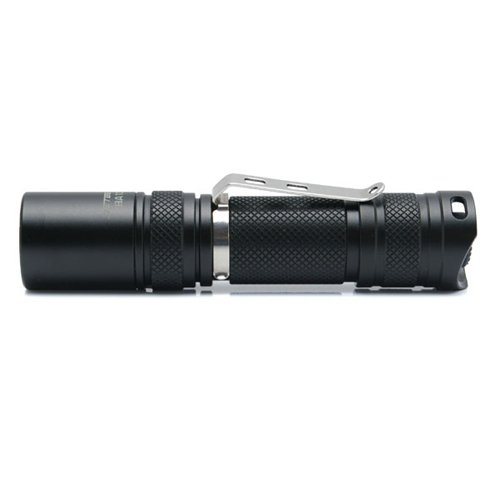 As with the BA10, it’s difficult to say where Jetbeam has skimped on the quality with this ‘budget’ torch. It represents excellent value for money.

In the world of flashlights, Jetbeam has made a name for itself by manufacturing torches which place it in the former category. With its budget line, which includes the Jetbeam BA10 reviewed here, it now has a series of inexpensive products aimed at the more price-conscious customer. This review will attempt to analyse whether ‘budget’ means inferior, value for money or somewhere in between. 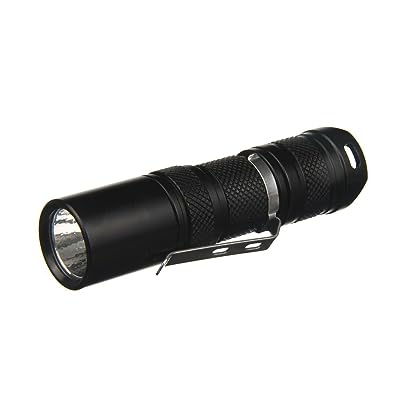 The JETBeam BA10 is powered by a single AA battery or rechargeable cell. I emailed Jetbeam asking if the flashlight could also be powered by a 14500 lithium battery. They replied that this was certainly possible, but it could cause the light to become hot.

The Jetbeam BA10 has the following dimensions:

The light also has the following features:

The  JETBeam BA10 came in a cardboard packaging and included a lanyard, a rubber switch cap, two spare o-rings and a manual. 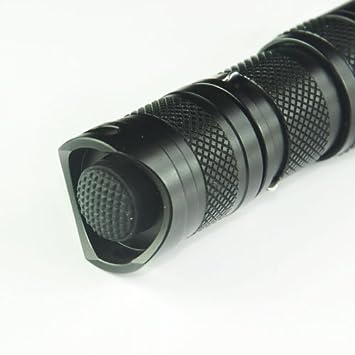 The workmanship is very good. It is well lubricated and protected by an o-ring at the tail cap and bezel. The fittings are first-class. The torch holds well in the hand with its 3 sections of diamond-shaped knurling on the tail, bezel and body. Some users, however, may feel that 10.5cm is too long for a single AA flashlight.

The clip deserves a special mention. I would normally remove it immediately as I see this feature as more of a hindrance than a help. The clip on the BA10 is thick and fits very tightly. To give you an idea, I attached the BA10 to the bill of a cap to create an improvised headlamp. I then shook the cap vigorously to see if the lamp would stay in place. It didn’t budge at all.

Be aware, though, that the weight of the clip may cause the light to roll slightly. This may be an issue if, for example, you place the torch on the edge of your fishing tackle box, or indeed anywhere where it might fall into water or on to a hard surface.

The light has two output modes which are accessed by using Jetbeam’s ‘Agility Switch System’. In non-marketing speak, this simply means pressing the tail switch and tightening or loosening the bezel. This system means that the light automatically memorises the last mode used.

See it at Amazon.com

Some people may regard a flashlight with a mere two outputs as a weakness, while others view it more positively. It seems that torch makers are slowly cottoning on to the fact that not all users require 6 different output levels, not to mention strobe or SOS. Many times these features, which may be useful for the specialist user, simply get in the way when you are trying to access the output required. I certainly welcome Jetbeam’s minimalist approach here.

Momentary activation is possible by slightly pressing the tail cap. The BA10 does not have an official lockout function, but as the tail switch does not protrude this should not be a problem. In any case, you can stop the light from switching itself on by loosening the tail cap very slightly.

The light can be used in candle mode, although this is only possible on a hard flat surface. Tail standing does not work, for example, on an ironing board.

Jetbeam offers a replacement if your torch malfunctions within 14 days of purchase and a free repair service for 18 months.

The JETBeam BA10 has an advertised runtime of 75 minutes on the maximum output. I tested it using a fully charged 2700mAh rechargeable battery. The flashlight became very warm after about 30 minutes but it was not too hot to hold. The light only appeared dimmer after about 60 minutes, but it still produced usable light.

I also ran the same test with an alkaline battery from a well-known company. This time the results were not so good, or perhaps better, depending on your perspective. The light became considerably dimmer after 43 minutes, although it was still bright enough to light up a completely dark room.

These results were yet another indication, if any was needed, that alkaline batteries should only be regarded as a stop-gap alternative to rechargeables.

I took the BA10 to some local fields at night and tried it out in the darkest corner next to a disused barn. The beam has a good combination of spill and spot and lit further than I expected it to. It was nowhere near the Jetbeam advertised distance of 97 meters on maximum output, but I measured about 50 metres of usable light. This means I would be able to discern small objects from this distance, which, for such a small light running on a single alkaline cell, is no mean feat.

The low level of 12 lumens allegedly runs for 30 hours. I found this output to be very good for a distance up to 10 metres, but it is too bright for close-up work such as reading in your tent. For rummaging around the house during a power cut, I would describe it as very good.

I would not normally have considered the BA10, or indeed any 1 x AA flashlight for biking. On the other hand, in view of the lighting distance already described and the fact that it is so easy to stow, I thought I would give it a try.

I used it with the Twofish Lockbocks cycle mount and cycled along a disused railway line. The light performed very well, and the broad beam on max was particularly reassuring in the darkness.

Obviously, this cannot be regarded as a serious option for night-time mountain bikers, but for those who may need an extra light boost when cycling along unlit paths, the BA10 is perfectly adequate.

While biking and walking with the BA10, I also used it with the clip on the bill of my cap to make an improvised headlamp and would describe this as an emergency solution only. The light feels heavy on the head and weighs down the bill so that the light points downwards rather than away from you. I also tried the clip on other items of clothing such as my shirt and trouser pockets. There is no chance of losing the torch as it fits so tightly.

Tough? Waterproof? What about winter?

I was so impressed with the light that I bought it. (see conclusion)  This enabled me to test it under more stringent conditions.

First of all, I dropped the torch on the concrete floor outside. There was a very small scratch on the edge of the tail cap – so small that I could not take a good enough photo to illustrate this.

To see if it was relatively waterproof, I also left it switched on in a sink full of water for 40 minutes. I removed the bezel and tail cap and tried to capture any drops of moisture with a paper towel but all the fittings were completely dry.

As the weather has been glorious here, I almost forgot that I would be using it in winter. I tried switching on and changing modes with my thickest gloves and found it very easy.

Desperately looking for a weakness, I thought I would leave it overnight in the freezer compartment of the fridge. The freezer temperature is -18C and I left it there overnight. The next morning I removed it and it switched on first time. Of course, the lens was misty but the traces of mist were easily wiped away with a paper towel.

It’s difficult to say where Jetbeam has cut corners with this ‘budget’ torch. In my opinion, it represents excellent value for money.

Although it only has two output modes, both of them can be used in a whole variety of situations. In addition, the impact-resistance and waterproof qualities make it a serious outdoor contender, and the winter test further confirms its tough-guy credentials. The beam is smooth and longish and the runtime is more than acceptable. Moreover, the clip grips very firmly.

Although it has no IBS or control ring as with other models from the same company, these sophisticated features would make the torch more expensive.
Some people might argue that the two output levels are insufficient for a light from a premium manufacturer. I would disagree. In fact, it was this simplicity which induced me to buy it.

After testing the light for more than a week, the only potential issue I can see is the clip. If you loosen the tail cap, the clip rubs against the edge. This may cause scratching after heavy use.

All in all, though, the JETBeam BA10 should be seen as a simple, high-quality flashlight for an affordable price.