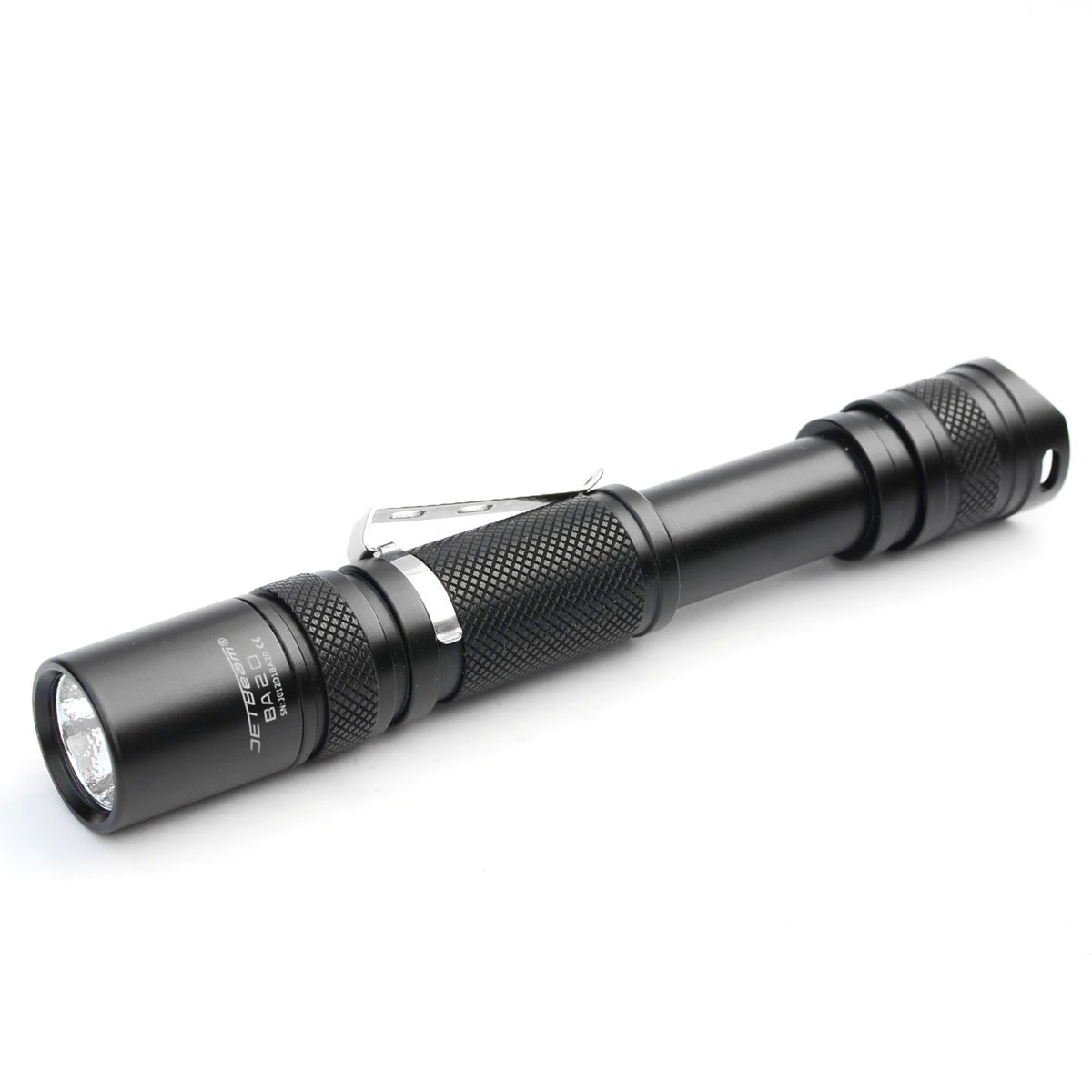 The JETBeam BA20 should be seen as a simple, high-quality flashlight for an affordable price.

In the world of flashlights, Jetbeam has made a name for itself by manufacturing torches which place it in the former category. With its budget line, which includes the Jetbeam BA20 reviewed here, it now has a series of inexpensive products aimed at the more price-conscious customer. This review will attempt to analyse whether ‘budget’ means inferior, value for money or somewhere in between. 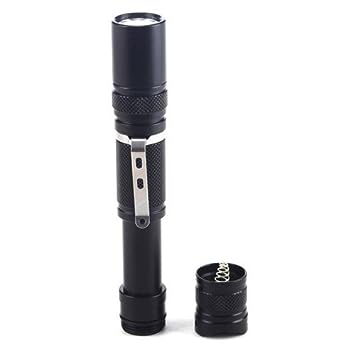 Pros:
+ Inexpensive
+ Ease of use
+ Very sturdy clip
Cons:
– Nothing significant
Note
This review will in some respects be identical to the Jetbeam BA10 review as, apart from the battery configuration and size, they are very similar. I will, however, try to point out any differences between the two torches here.

The Jetbeam BA20 runs on two AA batteries or their rechargeable equivalents and has the following dimensions:

The Jetbeam BA20 also has the following features:

The BA20 came in a cardboard packaging and included a lanyard, a rubber switch cap, two spare o-rings and a manual. 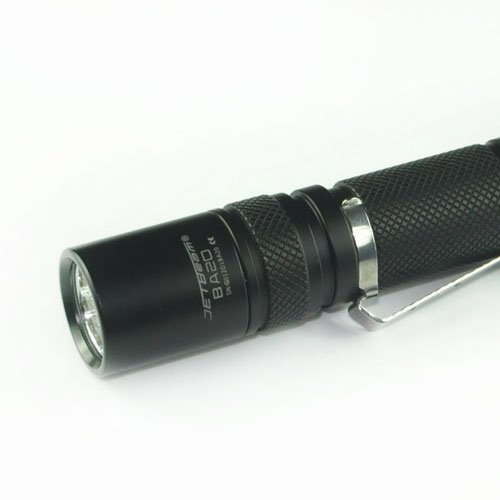 The workmanship is very good. It is well lubricated and protected by an o-ring at the tail cap and bezel. The fittings are first-class.

The clip deserves a special mention. The clip on the BA20 is thick and fits very tightly. I tried it on a trouser belt and a shirt pocket. It works better on the belt as the weight of the torch causes the shirt pocket to sag.

The light has two output modes which are accessed by using Jetbeam’s ‘Agility Switch System’. In non-marketing speak, this simply means pressing the tail switch and tightening or loosening the bezel. This system means that the light automatically memorises the last mode used.

Some people may regard a flashlight with a mere two outputs as a weakness, while others view it more positively. It seems that torch makers are slowly cottoning on to the fact that not all users require 6 different output levels, not to mention strobe or SOS. Many times these features, which may be useful for the specialist user, simply get in the way when you are trying to access the output required. I certainly welcome Jetbeam’s minimalist approach here.

Momentary activation is possible by slightly pressing the tail cap. The BA20 does not have an official lockout function, but as the tail switch does not protrude this should not be a problem. In any case, you can stop the light from switching itself on by loosening the tail cap very slightly.

The light can be used in candle mode, although this is only possible on a hard flat surface. Tail standing does not work, for example, on an ironing board.

Jetbeam offers a replacement if your torch malfunctions within 14 days of purchase and a free repair service for 18 months.

Differences between the JETBeam BA10 and JETBeam BA20

These 2 flashlights come from the same line of torches offered by the manufacturer. I thought, then, it may be interesting to point out some differences between them, apart from obvious ones such as size (pictured), runtime, and output.

JETBeam BA20 (above) and JETBeam BA10

Although the BA10 looks more streamlined and feels good in the hand, the BA20 feels better, in my opinion. This is due to the fact that the body tube not only has the same diamond-shaped knurling as the BA10, but also a smaller diameter towards the tail cap. This enables you to wrap a couple of fingers around the tube, providing better grip.

There is a difference of 240 lumens between high and low mode with the BA20. The BA10, however, only has 148 lumens difference between the two modes. In my opinion, the difference with the BA20 is too pronounced, but I appreciate that other users will have different opinions.

The BA20 has an advertised runtime of 105 minutes on the maximum output of 270 lumens. I tested it using a fully charged 2700mAh rechargeable battery. As with the BA10, the flashlight became very warm after about 30 minutes but it was not too hot to hold. It maintained maximum output, to my eyes, for about 95 minutes. At this point I watched how the light slowly dimmed to low mode. This took about 103 minutes.

I performed the same test with premium, or rather expensive alkaline batteries, and the results were similar to those for the BA10, namely that the torch works much better with rechargeable cells. It reverted to the lower mode after a mere 75 minutes.

As with the BA10, I took the BA20 to some local fields at night and tried it out in the darkest corner next to a disused barn. The beam has a good combination of spill and spot and lit further than I expected it to. It was nowhere near the Jetbeam advertised distance of 133 meters on maximum output, but I measured about 80 metres of usable light, which is nevertheless a respectable performance.

The low level of 30 lumens allegedly runs for 35 hours. I would describe this as a good ‘walking the dog mode’. Both the beam and lighting distance are almost identical to my keychain light, which puts out 80 lumens on maximum.

I also tried out the JETBeam BA20 while biking. I used it with the Twofish Lockbocks cycle mount and cycled along an unlit asphalt bike path with a couple of steep inclines and sharp bends. The light performed very well, certainly more than enough to light as far and as wide as I needed.

For biking, the BA20 may be considered as a serious alternative to a headlamp if you prefer to let the bike do the work. In addition, the runtime and output are lower than those for more expensive torches running on 18650 lithium batteries, but not dramatically so. 80 metres lighting distance and 90 minutes runtime should be more than enough for most users, and if not, you can always carry spare batteries.

I actually bought the BA10 after testing it so I was able to test the impact, cold and water resistance. But I could not do the same with the BA20 as I had to return it to the retailer. However, as they are both essentially identical flashlights with a different battery configuration, I have no reason to question the manufacturer’s claims.
For form’s sake, I tried changing the modes wearing my thickest pairs of gloves and it worked fine.

As with the Jetbeam BA10, it’s difficult to say where Jetbeam has skimped on the quality with this ‘budget’ torch. Again, it represents excellent value for money.

If you are prepared to accept the fact that it is not as portable, the BA20 will give you about 30 metres more light than the BA10 and will light for about 30 minutes longer. In addition, the advertised impact-resistance and waterproof qualities make it a very durable light. Moreover, the clip is stiff enough to hold the torch in place on your belt, for example.

Although it has no IBS or control ring as with other models from the same company, these sophisticated features would make the torch more expensive.

The bike test may also be interesting for those looking for a low-cost alternative to 18650 lights and who would prefer not to wear a torch and battery pack on their head.
My only gripe with the BA20 is the mode-spacing. I would have preferred a higher low mode. This however is purely subjective.

All in all, the JETBeam BA20 should be seen as a simple, high-quality flashlight for an affordable price.