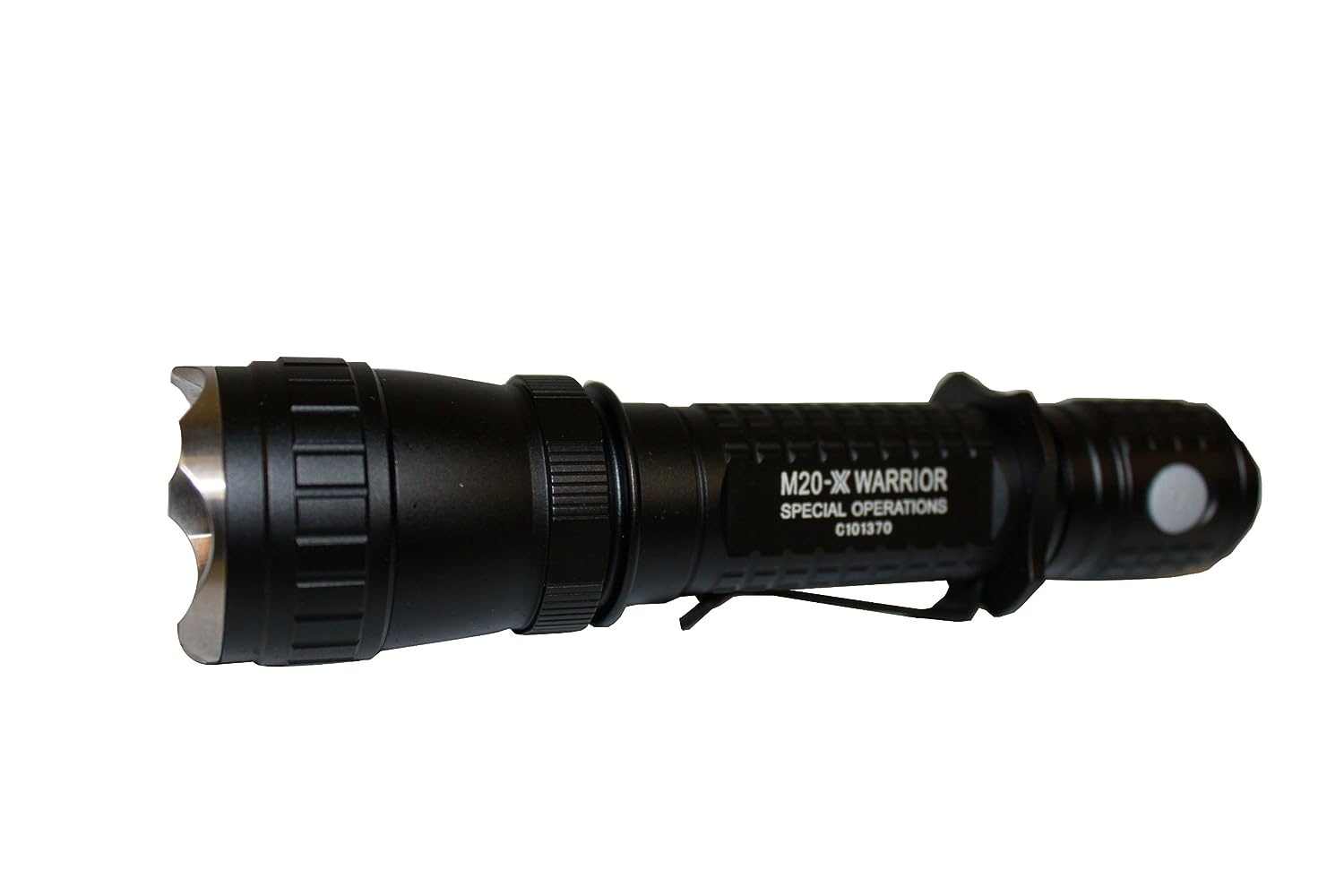 The Olight M20-X is a fantastic piece of outdoor equipment. It has a very attractive combination of terrific workmanship, above-average runtime on maximum and great output. It serves me very well outside, has useful extra functions and is easy to operate.

I bought the Olight M20-X after doing a lot of online research on the different torches powered by 18650 or CR123A batteries. I was looking for a light that was as compact as a 2 x AA battery model but more powerful. I found that most of the premium flashlight producers offered very similar models in this category, so I chose what I considered to be the best combination of output, runtime and price.

The Warrior came with some useful accessories such as a glow-in-the-dark tail cap and spare o-rings. I was very impressed by the holster supplied. It is not only very sturdy, but also offers side pockets to carry spare batteries. There is also a battery case to stop CR123A batteries from rattling inside the holster.

Of course, the torch itself was my main focus of attention. I liked the solid build quality, and, after removing the tactical ring and the steel clip, the M20-X felt great in my hand too. The torch is made out of aircraft grade aluminium.

The M20-X has a lock-out function to stop it switching on by accident. It also has a momentary activation feature and memorises the last light level used.

The Warrior claims to fulfill the MIL STD 810F standard, which, after reading Wikipedia, has left me more confused than enlightened. I guess I’ll just have to test it myself under adverse conditions.

According to the Olight the M20-X Warrior has the following output and runtimes:

These figures were very important for me. Although the torch is brighter with CR123A batteries, Olight M20-X claims that the runtime is longer (one hour longer) with a single 18650 rechargeable cell. I was prepared to trade the brightness for the runtime and had decided in advance that I would power it with a 18650 rechargeable.

For my test I just fitted the flashlight with a fully charged 2600mAh battery, switched it on max and watched how the light developed until the very end.

The M20-X was warm to touch for the first 90 minutes, but neither hot nor uncomfortable. For the first 2 hours, it remained very bright but started to dim gradually over the next 60 minutes. Even after more than three hours it was still easily able to light up to 25 metres, which for me was a revelation. It switched itself off just after 4 hours.

I sometimes think that  LED Flashlight producers fix their lighting distances at an annual competition to see who can make the most ludicrous claims.

Perhaps they exaggerate because they know that other factors such as runtime are clearly reviewed on several independent flashlight sites. These sites, however, will not tell you how far a torch can light. This is because there so many factors involved – it could be a rainy or misty night, there may be a full / partial moon, streetlamps or a car’s headlights in the distance etc.

If this is important for you, it may be a good idea to contact reputable dealers and ask them how far the torch can light. Ignore the starry-eyed retailers who just quote the company propaganda. I did exactly this and chose the dealer who gave the most realistic appraisal.

Olight claims a lighting distance of 250 metres. Moving away from the marketing brochure, and back to the real world: on a clear dark night I would say 120 metres with a 18650 rechargeable and 150 metres with 2 x CR123A batteries is the absolute limit. I have tested this under various conditions and would say a little over 110 metres is the norm. The beam is tight and smooth and everything at a medium distance of 40 metres or so will appear as clear as daylight.

On medium the Olight is great for at least 50 metres. For me, this is the most useful level, but it is also good to know there is something more powerful in reserve.

The lowest level, advertised at 7 lumens, is also surprisingly bright – certainly bright enough for walking your dog on a dark evening.

I never use the strobe (blinking) function, and actually see it as a hindrance when switching through the different levels. However, most flashlights in this category have this function, so I just have to tolerate it.

The Olight M20-X in Winter

The M20-X is very easy to operate with gloves on. In winter here, going out without gloves is unthinkable.

I did an additional test with the Warrior: I simply left it outside on the patio for 48 hours. It is not Siberia here, but it is very cold. The coldest temperature in this period was -15C during the night. The light switched on first time without the slightest flicker. This was with a 18650 battery, and not 2 x CR123As, which are supposed to be even more weather-resistant.

The Olight M20-X as a bike light

I have dynamo lighting powered by the wheel hub, which is fine for riding around town. On unlit paths, however, you really need an extra source of light. I tried the M20-X to see how clearly and how far it lights up the way ahead.

I used the M20-X in combination with the Twofish Lockblocks bike mount. When testing the torch, I used the medium setting on the M20-X and found this to be ideal. The beam easily lit up the whole path, and about one metre on either side of it, for 50 metres or more, which is certainly enough to register obstacles ahead and brake safely.

I would not recommend using the maximum mode, unless you are in the middle of nowhere, as you will simply blind people coming in the opposite direction. Mountain bikers on very rough, unfamiliar territory may need the maximum, so it’s good that the M20-X is extra bright for at least 2 hours.

The Olight M20-X is a fantastic piece of outdoor equipment. It has a very attractive combination of terrific workmanship, above-average runtime on maximum and great output. It serves me very well outside, has useful extra functions and is easy to operate.

The price may seem expensive, but beware: you can pay up to $79 more for a model in this Led Flashlight category.